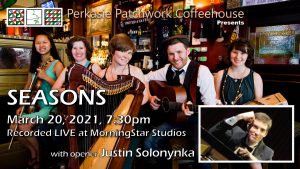 We are delighted to feature a virtual concert with Seasons. Website. Facebook. Five siblings create a fusion of Celtic and roots music on harp, hammered dulcimer, mandolin, fiddle, and more. Their original music has been featured on both national radio and television, including the show Life on the Rock.

Seasons is comprised of the siblings Mary-Kate Spring, Peter Winter, Mary-Teresa Summer, Mary-Grace Autumn, and Mary-Clare Chun Lee. The Lee siblings seek to not only pay homage to the rich tradition of Celtic and American folk music that they grew up in, but also to treat it as a living, breathing entity. The result is a constantly growing collection of original songs and tunes that are all at once both fresh and familiar.

Their six albums have received International recognition in Irish Music Magazine, Roots Magazine, Faith and Family Magazine, and more. Mary-Kate has won first place for Celtic harp at the the Mid-Atlantic Fleadh, and has competed in the All-Ireland Harp Competition in both Derry and Sligo, Ireland. Mary-Grace has also won first place in the Mid-Atlantic Fleadh on Miscellaneous Instrument, and competed internationally in Ireland.

From Musical Festivals to Renaissance Fairs, from busking the streets of Ireland to performing for school assemblies, Seasons strives to share their music where and whenever they can. With their influences ranging from O’Carolan to Yeah Yeah Yeahs, the group creates an exciting and surprising fusion of various Celtic and American folks styles in their original music, resulting in a sound that is truly worth a listen.

Opening the evening will be Justin Solonynka. For over twenty-five years Justin has performed his virtuosic piano blend of folk, rock, and jazz for audiences throughout the greater Philadelphia area. He combines original rock songs and beautiful instrumentals with his gift for storytelling to create shows that are enjoyed by people of all ages.