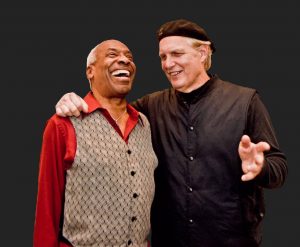 River Spirit Music and Perkasie Patchwork Coffeehouse have joined forces to present this special virtual concert in association with Musae using their 360°/VR platform to make the show an unforgettable experience. The concert will be live-streamed from our friends at Morningstar Studios.

Their Story – Reggie and Greg have a unique story. Born three days apart, ancestry flowing through the same portal of history, Richmond, VA, they are on a pilgrimage together – one that began three decades ago. The racial divisions that are the reality of America, started them in two different worlds, but the amazing bonds of music, respect, admiration, and shared vision have brought them together as friends and colleagues.

This show is not just one of random talk. This is not just a concert of songs that simply entertains.  “Deeper Than the Skin” is a experience of singing and listening… of experiencing and sharing a connection so deep that touches your being and engages your mind… it makes you laugh, smile, cry and reconsider what you know about our history. And it’s an invitation to open your heart and mind to a story of shared humanity that resonates with your own.

Two separate narratives forged into one powerful friendship aimed at finding common ground and helping others to do the same.

“Deeper Than the Skin” recounts a remarkable journey that started 30 years ago and is now offering hope to people all over the nation. It’s a presentation that ends with an open dialogue that moves the audience from emotion into action…that gives voice and direction to the question “What can I do to improve our nation?”

“Deeper Than the Skin” is an interactive, engaging invitation to take a step into our present reality. It’s an affirmation of the notion that a more perfect union begins…. with us!

Bios Reggie is the Music Education Director of the Living Legacy Project of the UUA, co-leading tours through the hallowed Civil Rights Ground of the South. He’s a Woodrow Wilson Scholar. Solo, and in the duo, Kim and Reggie Harris, he has led hundreds of programs on race and social justice. Greg was a part of the planning committee (at Reggie’s request) of marching in the Arc of Justice, the Unitarian Universalist Conference, commemorating the 50th anniversary of the Selma Voting Rights Action. He had the honor for two years of having his song, “Rosa Parks,” play when RosaParks.com was opened. Greg led his song, “What Must Be Done,” in the trio, Brother Sun, before thousands of you UUs at the opening service of the Providence, RI General Assembly. Together and individually, Reggie and Greg have brought the issue of Race before audiences all across America.

Where Do We Go from Here The work of justice-making is long and difficult. They share not only a story of overcoming, but provide a living, breathing example of celebration, creative resistance, and joy. There are many who say that they are the embodiment of those traits – that their talent and communication skills make their performances infectious. Both are committed professionally to inspiring people, to encourage others to take that step beyond their comfort zone. As they reach across the racial divide, they encourage others to foster the relationships that are, in the end, a path to healing. https://deeperthantheskin.com/